SYRACUSE, N.Y. –  Steve Allman filled the Center of Progress Building at New York State Fairgrounds January 20-21 with about 250 exhibiting antiques dealers for his Salt City Antiques Show. The show is a winter escape for the region, something to break the cabin fever, an excuse to get out and do something different, and that was exactly what about 4,000 people did Saturday and Sunday, filling the building quickly each morning, searching through the exhibits for just the right pieces to add to their collections.

Mike Gallant, Hometown Antiques, Glenburn, Maine, was at the Salt City Antiques Show for the first time, offering a collection of small things that included Nineteenth Century toys, painted boxes, collectible marbles and more. He sold something from each of these categories and also earlier stoneware. He said it was also a good opportunity to buy more for his own collection and inventory.

A third-generation antiques dealer and new to the show was Chris Blanchard from Jamesville, N.Y. He came in with a great variety of early American antiques, particularly objects from the Eighteenth Century, which began selling quickly. His stoneware was popular with the knowledgeable collectors at the show, selling well. He also had some furniture, including a cherry stand, a little rough, but still it went out on the first day, and there was also more painted furniture.

Green Antiques was happy to beat the Salt City Antiques Show as well. From the small, northwest Connecticut town of Sharon, this dealer brought a mix of Nineteenth and early Twentieth Century quilts, 200-year-old furniture and little accessories. Early in the show, a lady was enamored with a Lone Star quilt in polished cotton with an overall green color, and the same on its back, 100 percent hand stitched, circa 1920-30. The customer spent a while looking it over, left the booth but came back shortly thereafter and took it home. Sales for the dealer also included a Waterbury shelf clock, circa 1860, a Connecticut cherry stand, circa 1775, and a large assortment of small pieces from the silver showcases.

Red Barn Antiques, Egremont, Mass., is a specialist in Nineteenth Century lighting that has been restored and electrified. Here the firm’s business was good, but it was the furniture category that stood out, with an Eighteenth Century Moroccan table being one of their best sales of the weekend, along with many smaller pieces.

Ancient Origins, Canandaigua, N.Y., featured stoneware from the Northeast and rare coverlets. The owner, Frank Bergevin, was thrilled with his weekend’s results as he began with the sale of a rare piece of stoneware, a large butter churn with a lion in blue selling in the four figures. He also brought two Jefferson County, N.Y., coverlets from the Nineteenth Century, which attracted a great deal of attention. He said that more than half of the stoneware he brought sold during the show.


Bill Thomas, Abington, Md., was selling from his assortment of smalls. He offered a recently found collection of carnival glass, several hundred pieces in perfect condition, as well as an assortment of small silver articles and crystal. Together this gave him great variety, he said, and good sales.

And there was a great deal more selling with great variety. Tony Mullins, Bernhards Bay, N.Y., was selling from a collection of kitchenalia, which included the cabinets and the little things that filled them. Tony Perretta, New Hartford, N.Y., sold a Nineteenth Century walnut veneer cupboard, not too large but in excellent condition on the first day.

Richard Fuller, Royalton, Vt., was offering his collection of Vermont country furnishings, including a blue painted cupboard with scroll design top. His sales included the farm table in its original finish and an American Sheraton dressing stand in chrome yellow.

The Cutters Wheel is Joan Randle with her extensive inventory of cut crystal. Her sales were good, with both Nineteenth and early Twentieth Century pieces.

Odds and ends of silver, not really silver matching but unusual pieces, are Sandra Willson’s specialty. From Churchville, N.Y., she was busy all weekend explaining what the pieces were used for and selling them.

Steve Allman has been producing the Salt City Antiques Show and New York shows for a generation now, and this, he said, “was gratifying. The show was cheery, a pleasure to run because the customers came in to have a nice time, the exhibitors had good sales and that makes for a good show.” He added that

the success of this show also gave his March 10-11 show a big boost with the dealers.

Allman Promotions conducts three shows each fall and winter in this facility although only this one is called the Salt City Winter Antiques Show. The 2018 events at the New York State Fairgrounds are The Greater Syracuse Antiques Expo, March 10-11 and October 20-21 and Syracuse Thanksgiving November 24-25. Allman also produces the Madison-Bouckville Big Field Antiques Show August 17-19 and a group of Florida shows.

SYRACUSE NY –  The NY State Fairgrounds Center of Progress Building in Syracuse will house more than 200 exhibitors for the January 20-21 2018 weekend at Allman Promotion’s Salt City Antiques Show. The show kicks off the new year’s season for antiques, home decor, and vintage, with the inventories of the dealers offered arriving from throughout the east and mid-west.

Drawing from across the North East tier of America, and parts of Canada, Salt City Antiques Show will be a winter shopping spree for over 5000 shoppers who are usually unaffected by weather. Steve Allman, show manager, said “This may be in part because the customers are used to winters in ‘The North’, and perhaps too, because the road crews are better equipped to deal with winter conditions so regardless of the weather, the customers come!”

Variety in the collections at Salt City Antiques Show is vast. Look for White & White to offer Colonial period furniture and art; Red Barn Antiques of South Egremont MA, is a specialist in lighting; Colony Shop Antiques and Art has a full time shop in the Syracuse suburb of Fayetteville, but this is a very important show to do. Dolls and bears from Stacey Lea, the owner of Stuck on Dolls in Laurel MD, will be there; and there is ephemera from several, along with vintage toy sellers, decor, and more. A dealer whose inventory included jukeboxes and pinball machines promises to return again after a successful show in 2017. Silver, porcelain, china, and much more will all be there for the shoppers to find.

There is plenty of free parking and great on-site food service. For Salt City Antiques Show GPS, put in Center of Progress Building, 581 State Fair Boulevard, Syracuse NY. For more information on this show, call Steve or Judy at 239-877-2830. 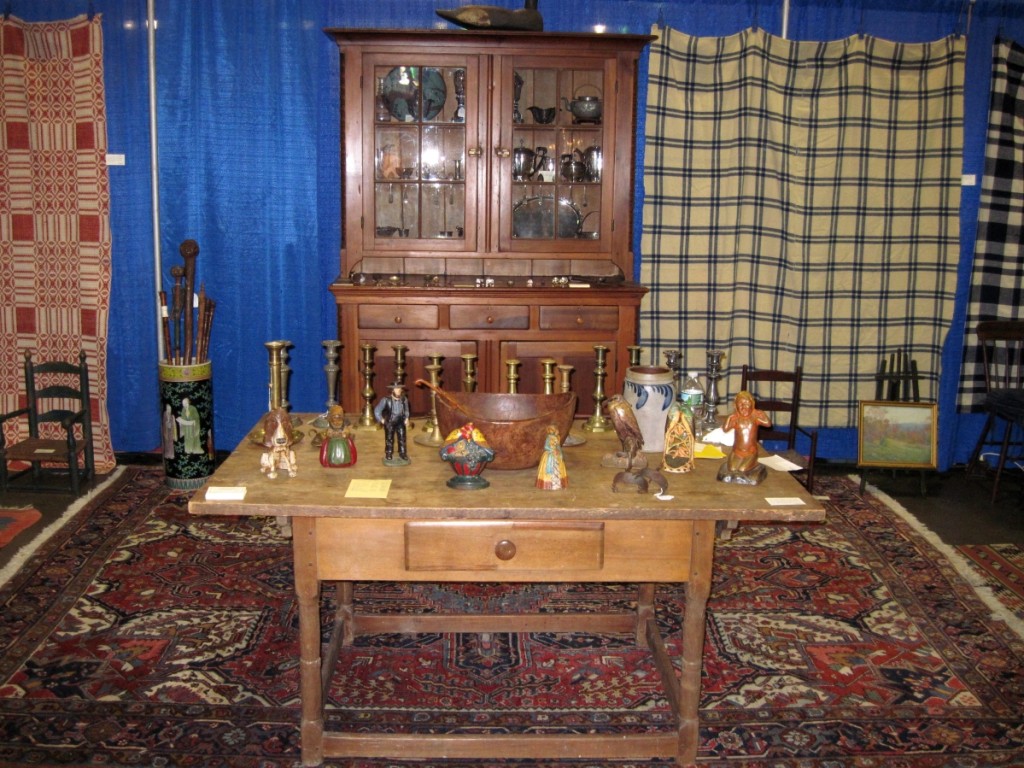 SYRACUSE, N.Y. – Steve Allman said he was thrilled with the wonderful weather, which allowed a full house for his Salt City Winter Antiques Show in the Center of Progress Building at New York State Fairgrounds January 21-22. The show drew 250 exhibitors and more than 4,000 shoppers for the weekend.

“This show is remarkable in how the area supports it, said Allman, “We get wonderful crowds both days looking for all kinds of antiques, furniture, early décor and collectibles and even now later collectibles into the midcentury, and these dealers have it.” He noted that the show is big enough to offer the variety customers seek.

The show’s promoter, Steve Allman and his wife, Judy, were chatting with dealer Steven White about the Bergen County, N.J., corner cupboard he sold during the show, just before it left the show floor.

Steve White of White & White, Skaneateles, N.Y., offered some of the show’s earliest merchandise. His sales included a Bergen County, N.J., corner cupboard from the Eighteenth Century, sold on the second day after the buyer deliberated for two days; a pair of portraits from the same time period; and a variety of small silver accessories for the dining room.

On the other hand, Anita DeOld, trading as A Touch of Glass, Verona, N.J., was selling early 1900s Christmas decorations and glass, including pieces from an enormous collection of late Nineteenth Century hatpins. Her inventory also included head vases from the 1930s and 1940s, and various other later forms of decorative glass and earthenware. 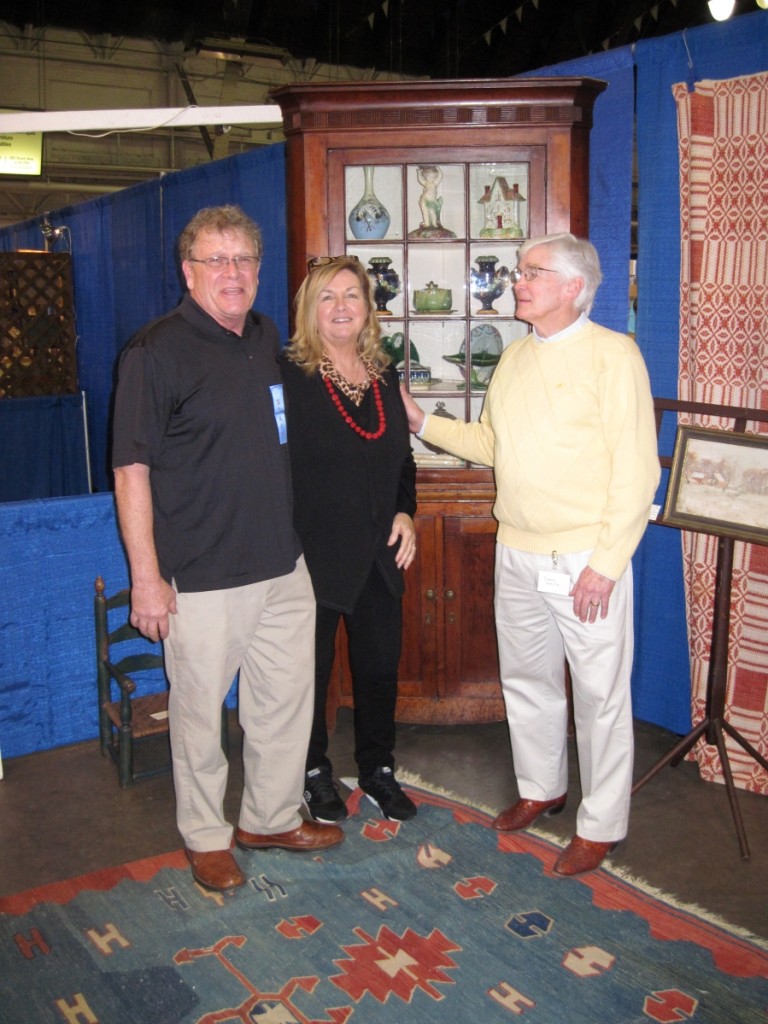 Miniature chests of drawers were big sellers for Gary Smith, Big Flats, N.Y. He sold several, including one that was a model of Chippendale style, along with a pair of Eastlake chests.

Dealers didn’t just come from New York though. Glenn Freeman is a Baltimore-area auctioneer who took an oversize booth to show all he had to offer. His sales were primarily smalls, such as silver pin cases, pattern glass salt cellars, dominos, pin cushions, inkwells and a great deal more of these Nineteenth Century treasures.

Red Barn Antiques, South Egremont, Mass., specializes in lighting, with mostly Nineteenth Century fixtures that once ran on some kind of fossil fuel (whale oil, kerosene or gas) that have been converted to electric. Dealer John Walther does most of the work on the fixtures, including polishing the metal and brass, and then he and his wife do the marketing. He noted sales were good and included “several ceiling fixtures, a couple pair of converted lamps and also some of the earlier copper.” He said they also sold blue daisy and button glassware.

Dolls and bears were walking out the door, according to Stacey Lea, the owner of Stuck on Dolls, Laurel, Md. She and her husband were showing their collection, filling tables that were depleted over the weekend as artist bears were sold in good numbers, and so too were dolls and the accessories for Barbie dolls and other knickknacks for them. 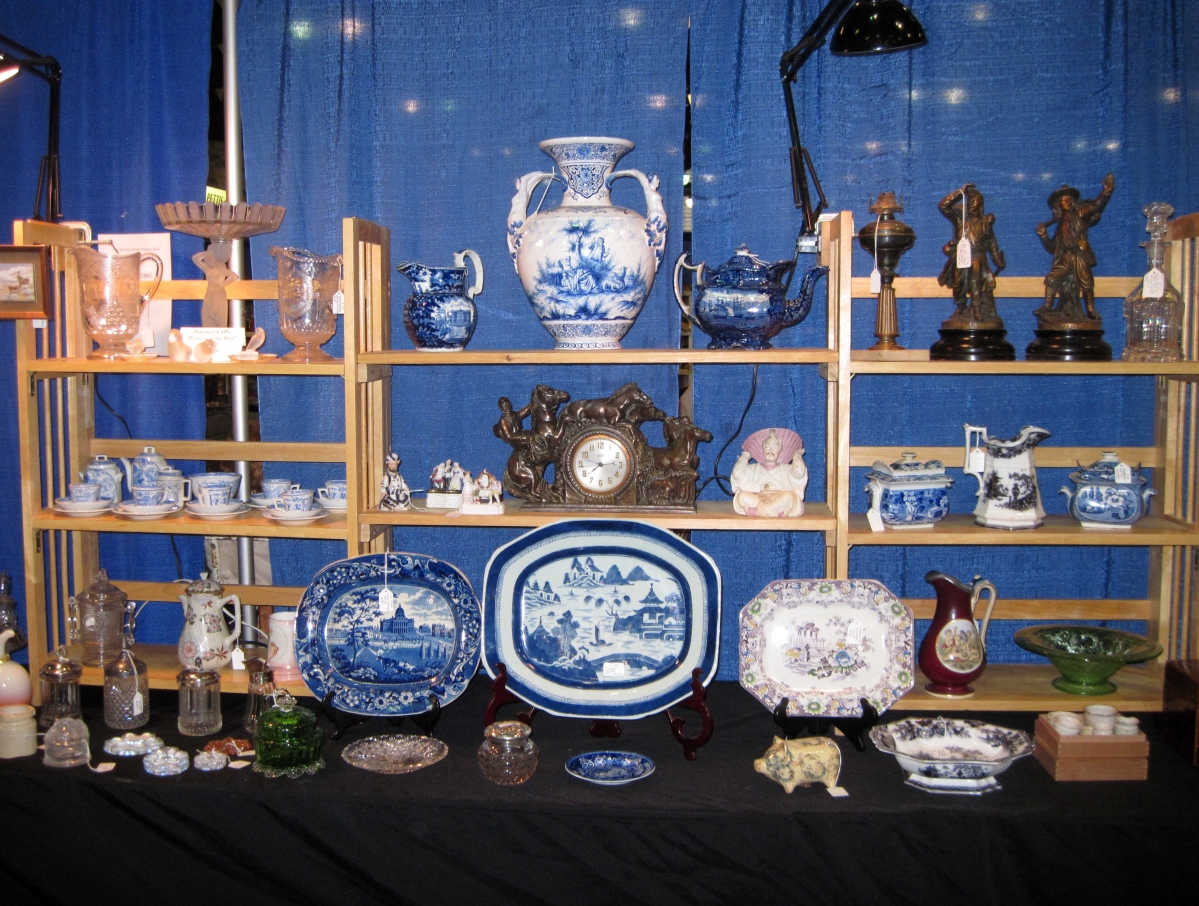 Colony Shop Antiques and Art has a full-time shop in the Syracuse suburb of Fayetteville, so this is among a very short list of shows it does. Its results, however, were rewarding, according to owner Edward Becker. Sales included a Nineteenth Century Swiss disc music box in good condition with several discs; a Black Forest bear measuring more than 2 feet long; Chinese imports in jade and porcelain; jewelry; and fine art.

The collections here offered great variety for all, spanning centuries, geography and styles – in short, something for just about everyone.

Allman Promotions conducts three shows each fall and winter in this facility. The next event here is the Greater Syracuse Antiques Expo March 11-12. Allman also produces the Madison-Bouckville Big Field Antiques Show August 18-20 and a group of Florida shows. For more information, www.allmanpromotions.com or call Steve at 315-686-5789.